At the time of the resource assessment in November 2015, there were three existing, or baseline, open-cut brown coal mines operating in the Gippsland Basin: Yallourn, Hazelwood and Loy Yang, all located in the Latrobe Valley. Collectively, these mines provided approximately 59 million tonnes of brown coal annually for electricity generation. Black coal has been mined in the Gippsland Basin in the past, but remaining reserves have been largely exhausted and are currently considered uneconomic to mine.

As of November 2015, there were proposals to extend all three existing open-cut mines. The Hazelwood Power Station and associated coal mine closed in March 2017. The proposed Hazelwood coal mine extension will not proceed, but was included in the modelling for this assessment, because the mine closure was announced after modelling had been completed.

As of November 2015, there has been no coal seam gas production in the Gippsland Basin bioregion and limited exploration for coal seam gas.

The assessment investigated potential changes in groundwater from the proposed expansion of the Yallourn, Loy Yang and (now redundant) Hazelwood mines. Models project changes to groundwater for an area of 1,677 square kilometres, peaking in around 2072, with reduction in the annual baseflow of 78 megalitres predicted in the Latrobe River. This is approximately 0.02% of the mean annual flow. The maximum potential changes within this area are expected to be localised near the mines.

Scientists used the best available data to describe coal and coal seam gas resources, and to assess potential changes to surface water and groundwater due to the proposed coal mine extensions. The assessment used a combination of two predictive numerical models consisting of a regional multi-layered groundwater model (to predict groundwater impacts) and a catchment runoff model (to predict connectivity with surface water features). The modelling approach was based on the methodology adopted for the onshore natural gas water science study commissioned by the Victorian Government's Department of Environment, Land, Water and Planning.

The assessment did not include an analysis of the potential impacts and risks that coal resource development could have on water-dependent ecological, economic and sociocultural assets in this bioregion. However, the Bioregional Assessment Program commissioned a number of projects to improve methods for understanding how hydrological changes might affect environmental assets. These projects included: better understanding of how ecosystems use groundwater, improved estimates of how groundwater contributes to baseflow in the Latrobe, Thomson, Macalister and Mitchell rivers, and better tools to assess how changes in groundwater might affect wetlands.

Local experts, including the East and West Gippsland Catchment Management Authorities, councils and community groups, provided information on water-dependent assets, such as wetlands and bores that rely on surface water or groundwater. A register of these assets is available for use in future assessments.

The data and tools from this assessment are available to support natural resource management in the Gippsland Basin bioregion. They can be used in future assessments and environmental studies.

Results from this assessment are provided in seven reports, a water-dependent asset register and a data register on www.bioregionalassessments.gov.au/assessments/gippsland-basin-bioregion. The website also includes links to the other Bioregional Assessment Program projects conducted by the Victorian Government to improve understanding of priority groundwater-dependent ecosystems in the Gippsland Basin. It provides open access to the methods and datasets used to develop the assessment. Data from a range of disciplines are provided under a Creative Commons Attribution license where possible, on the Australian Government's public data information service www.data.gov.au. 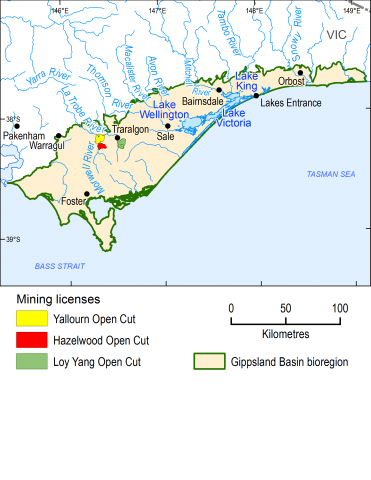 Where is the Gippsland Basin Bioregion?

The bioregion is in south-eastern Victoria. It covers an area of 14,636 square kilometres.