Coal resource development and water resources in the Cooper subregion

There is no potential for coal mining in the Cooper subregion. One advanced coal seam gas proposal was identified: the proposed Southern Cooper Basin Gas Project, which targets coal seam gas in the Patchawarra Formation (a geological unit). Should it go to production, the project may increase surface water flows into Strzelecki Creek. Springwater levels of the Lake Blanche Springs are unlikely to be affected.

As at June 2015, there was no coal mining or coal seam gas production in the subregion, but some exploration was occurring. Coal seams found in the rocks of the Cooper and Eromanga geological basins are too deep for coal mining to be economic.

The Weena Trough was identified as one area where coal seam gas could be extracted as an individual resource and contains the proposed Southern Cooper Basin Gas Project. This project is targeting the coal seams of the Patchawarra Formation and would need state and Commonwealth approval before full-scale production could start. Companies involved in this project are testing to assess the commercial viability of coal seam gas production. At the time of this assessment, it was anticipated that production might commence in 2020 or 2021, with a reported production life of 20 years. Other proposals such as those associated with the Patchawarra Trough are at too early a stage of development to be considered in this assessment.

Operations of the proposed Southern Cooper Basin Gas Project could increase surface water flows into Strzelecki Creek. There would be minimal effect on groundwater levels near the proposed development site and there is no evidence that this activity would affect groundwater outside the Weena Trough.

Depending on how the gas is extracted, there is potential for some groundwater leakage from the overlying Hutton Sandstone to the Patchawarra Formation.

Potential changes to surface water flows are very unlikely to affect the Lake Blanche Springs because the springs are sourced from deep underground. The springwater is sourced from the Coorikiana Sandstone which is not connected to the Patchawarra Formation or the Hutton Sandstone. The springs are protected under national environmental law.

Scientists used the best available data to describe coal and coal seam gas resources, surface water and groundwater. They also consulted with experts to better understand landscape processes and interactions in the Weena Trough and the southern Cooper subregion.

Potential hazards due to coal and coal seam gas development that may impact on water resources and water-dependent assets were identified.

The scientific findings of two South Australian Government projects which were part of the Bioregional Assessment Program informed this assessment through further detailed investigation (including of identified hazards). These projects (Lake Eyre Basin Rivers Monitoring Project and Lake Eyre Basin Springs Assessment) investigated surface water and groundwater in the coal basins within the Lake Eyre Basin bioregion, including the Cooper subregion.

Local experts, including Natural Resources SA Arid Lands, councils and community groups, provided information on water-dependent assets, such as wetlands and bores, that rely on surface water or groundwater. A register of these assets is available for use in future assessments.

The data and tools from this assessment are available to support natural resource management in the Cooper subregion. They can be used in future assessments and environmental studies.

Results from this assessment are provided in five reports, a water-dependent asset register and a data register at www.bioregionalassessments.gov.au/assessments/cooper-subregion. The website includes links to the work done by the South Australian Government as part of the Bioregional Asessment Program. It also provides open access to the methods and datasets used to develop the assessment. Data from a range of disciplines are provided under a Creative Commons Attribution license where possible on the Australian Government’s public data information ervice www.data.gov.au. 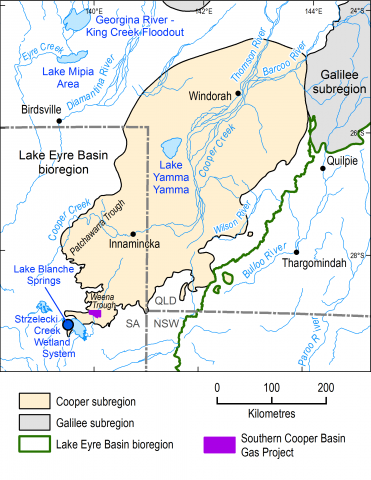 Where is the subregion?

The Cooper subregion includes parts of north-eastern South Australia and south-western Queensland and is one of four subregions within the Lake Eyre Basin bioregion. The Cooper subregion is defined by the known extent of the geological Cooper Basin, which is buried deep below younger rocks such as those of the Eromanga Basin.