Coal resource development and water resources in the Clarence-Moreton bioregion

Potential changes in water resources due to the withdrawn West Casino Gas Project would likely have been minimal at the surface. This is because the proposed development would have extracted small volumes of groundwater compared to the volume of groundwater recharge. In addition, multiple layers of low permeability rock, called aquitards, are a partial barrier that limit changes to water within the coal seams and other deeper layers from reaching the surface.

There is very limited potential for the commercial production of coal seam gas in the Queensland part of the bioregion and no new coal mining development was identified in the bioregion.

There is one operational coal mine, Jeebropilly Mine, in the Bremer river basin, west of Ipswich. This open-cut mine is due to end production in 2017. At the time of the resource assessment (November 2014) there were no proposals for the development of new coal mines within the bioregion.

At the time of the resource assessment (November 2014), one new coal seam gas development was proposed in the bioregion. The West Casino Gas Project was an exploration and pilot production coal seam gas development in the Richmond river basin near Casino. In December 2015, the proponent (Metgasco) decided to sell their petroleum exploration licences and withdraw their petroleum production licence application to the New South Wales Government and ceased development activities.

What would the potential changes in water have been?

The assessment investigated potential changes in surface water and groundwater due to the withdrawn West Casino Gas Project as it was the only new coal resource development identified.

The groundwater and surface water systems in the Richmond river basin in New South Wales are separated from those of the Bremer river basin in Queensland by a natural geological barrier. This means that changes to water resources from the withdrawn West Casino Gas Project could not compound or be compounded by changes to water resources caused by the Jeebropilly Mine.

Models show potential changes to the groundwater level for an area of 249 square kilometres west of Casino if the West Casino Project had gone ahead. Changes within this area are likely to have been minimal (less than one metre drawdown) because the withdrawn development would have extracted very small volumes of groundwater compared to the volume of groundwater recharge. In addition, multiple layers of low permeability rock, called aquitards, are a partial barrier that limit changes to water within the coal seams and other deeper layers from reaching the surface. Analysis of surface water flows indicate there would have been a 95% chance that the decrease in streamflow in the Richmond River would be less than 100 megalitres per year. That change is far less than the observed mean streamflow rates.

No further assessment was done, because the changes in water were likely to be too small to have a measurable impact.

Further details on the results can be found in Assessing impacts of coal resource development on water resources in the Clarence-Moreton bioregion: key findings (outcome synthesis).

Scientists used the best available data to describe coal and coal seam gas resources, and to assess potential changes to surface water and groundwater due to the withdrawn West Casino Gas Project. A basin-wide three-dimensional model of the geology was developed to help identify ways in which water moves on the surface and underground. This information was used to model groundwater and surface water in the Richmond river basin to predict potential changes.

Local councils, natural resource management groups and community groups provided information on local water-dependent assets that they value, such as wetlands and bores. A register of these assets is available for use in future assessments.

The data and tools from this assessment are available to support natural resource management in the Clarence-Moreton bioregion. They improve the quality of information for future decision making. They can also be used in future assessments and environmental studies.

Results from this assessment are provided in ten reports, a water-dependent asset register and a data register at www.bioregionalassessments.gov.au/assessments/clarence-moreton-bioregion. The website provides open access to the methods and datasets used to develop the assessment. Data from a range of disciplines are provided under a Creative Commons Attribution license where possible on the Australian Government’s public data information service www.data.gov.au. 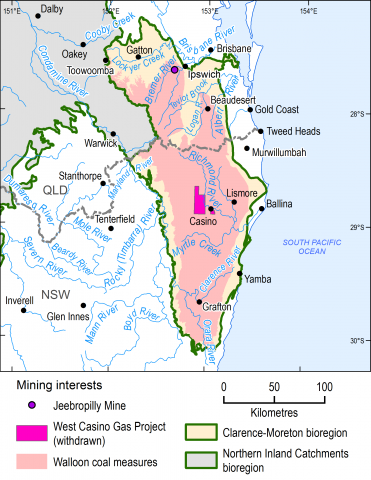 Where is the bioregion?

The bioregion is in north-east New South Wales and south-east Queensland. It covers an area of 24,292 square kilometres.