Where are the coal and coal seam gas resources?

Most of the subregion is underlain by rocks of the Surat geological basin. The coal seams in these rocks are at depths that are uneconomic to be mined.

Coal seams in the rocks of the Sydney and Gunnedah geological basins underlie the eastern and south-eastern parts of the subregion. A major coal deposit was identified at Cobbora, about 22 kilometres south-west of Dunedoo. In December 2015, the NSW Government, who owned the Cobbora Coal Project, announced it would begin a process to sell the Cobbora Holding Company landholdings as agricultural land and that the project approvals and the exploration licence will be surrendered.

Coal seam gas exploration has only occurred in rocks of the Gunnedah geological basin. Results to date have shown that any methane gas present in the coal seams is in such low concentrations and contains so much carbon dioxide that commercial coal seam gas production is uneconomic. As of October 2014, when the assessment of resources was completed, there were no coal seam gas developments planned or proposed in the Central West subregion.

Scientists used the best available data to describe coal and coal seam gas resources, surface water and groundwater. Local experts, including councils, natural resource management groups and community groups, provided information on water-dependent assets, such as wetlands and bores, that rely on surface water or groundwater. A register of these assets is available for use in future assessments.

The data and tools from this assessment are available to support natural resource management in the Central West subregion. They can also be used in future assessments and environmental studies.

Results from this assessment are provided in four reports, a water-dependent asset register and a data register at www.bioregionalassessments.gov.au/ assessments/central-west-subregion. The website provides open access to the methods and datasets used to develop the assessment. Data from a range of disciplines are provided under a Creative Commons Attribution license where possible, on the Australian Government’s public data information service www.data.gov.au. 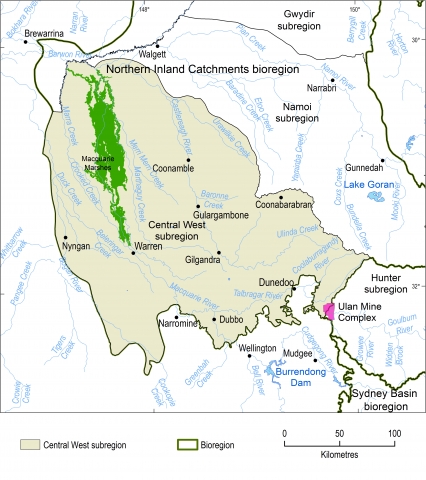 Where is the Central West subregion?

The Central West subregion is in the Murray–Darling Basin in central New South Wales. It is one of the four subregions within the Northern Inland Catchments bioregion.